We all say it constantly, myself included: Where have you been? What have you been up to? Oh, you know I’ve been sooooooo busy. You know how it is…. Or, it’s really great when you didn’t do something you were supposed to do or someone asked you to do: Why didn’t you get that done? I was too busy! It’s like the catch-all excuse. And truth be told, it’s kind of long been a bit of a pet peeve of mine – even though I can still often be heard using it myself. Because honestly, it’s often what we’ve really led ourselves to believe…that we really wanted to get that phone call made or get that report written, but darn it, we were just too busy to get it done!

END_OF_DOCUMENT_TOKEN_TO_BE_REPLACED

It’s been kind of a crazy week. Actually, crazy and incredibly stressful, if you must know. Not that you even asked, but hey, I told you anyway. But isn’t that kind of what blogging is all about? I digress. Now, where was I? Crazy and stressful. Right.

First of all, lots going on at work. But then again, there usually is. Second, Jeff was out of town so I was playing single mom. So, you know what I did the first night I picked them up? Yep, I hit the McDonald’s drive thru. Probably not going to win the Nutritional Mom of the Year award for that one but I was tired, stressed (did I mention that already?) and essentially in survival mode. And, I’m pretty sure that the Golden Arches were created for parents having days like that. Let the record show that I did not get anything for Elena, though. I did manage to dig up something semi-nutritious for her. I think I have created some unofficial rule that my children can’t have fast food until they turn three or something – and then all bets are off. Don’t ask my logic in this, because I have no idea but it seems like the right thing to do so I just go with it.

END_OF_DOCUMENT_TOKEN_TO_BE_REPLACED

Earlier this spring (which is, of course, really more like late winter in Portland), I noticed when I was coming in and out of work every day that our horticulture team was giving a lot of attention to the large island of dirt that stands beside a side road that runs in front of the admin buildings and in front of an entrance to the main lot for the zoo.

Then, one week I noticed several piles of a very dark substance appeared on the island that was later spread around. Typically, I would have assumed that it was a very rich soil, except that it definitely had a certain “smell” to it. This led me to one conclusion: that it was actually the infamous “Zoo Doo,” which is a compost made up of animal manure, among other things. I have not asked anyone about this to confirm my suspicions, but I’m pretty sure that I am right. (Flash to my husband reading this and saying to himself: Yeah, that’s what you always claim.)

I didn’t give it much more thought until one day, there was suddenly this beautiful field of wildflowers on the island. It’s so pretty and I so enjoy admiring them as I walk up from our parking area into our building each morning. It’s a nice way to start the day. Here are some photos I attempted of the flowers today: 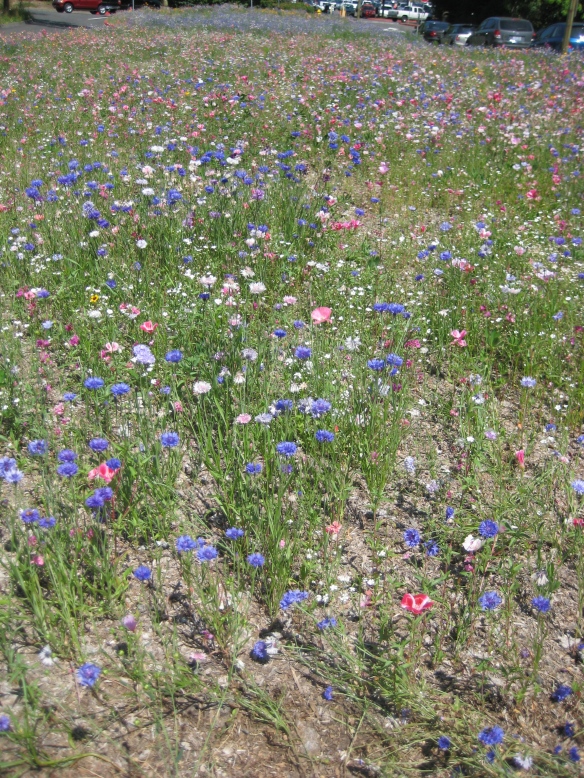 I think for the first time this summer we are having several consecutive days of temperatures in the high 70s/low 80s. It’s so nice. Though, Portland being by far the coolest climate I’ve ever lived in, it’s funny how quickly your body adapts. Before you know it, 60 seems like 70, 70 like 80, etc. Case in point: Yesterday a friend and I went outside to eat our lunch on a bench and I would have almost bet my life that it was at least 85. Instead, we later found out it was in the low 70s. Which means that I definitely have a future in broadcast meteorology, if I want one.

Anyway, when I left work this afternoon it was glorious outside, as it has been recently. Instead of my usual way out, I departed in the opposite direction because I was headed down to the NW 23rd Street area for first-ever (in Portland) weekday haircut. (More on that in a minute.) The opposite direction winds you through some back roads around Hoyt Arboretum and through some lovely neighborhoods. For the uninitiated, the Arboretum, part of which is basically across the street from the zoo’s parking lot, encompasses – among other things – 21 trails covering 12 miles within 187 acres. All inside the City of Portland.