When we moved to Oregon in 2006 (yes, that means this November will be seven already…where does the time go?), we sorta, kinda started this tradition of heading to the coast for one of the days of Memorial Day weekend.

Of course there’s only one guarantee about our day at the beach at the end of May: it will be cold, windy and overcast – if we are lucky. It’s kind of a joke about the crummy Memorial Day weather in Oregon, except not really because it’s basically true that it’s NEVER nice. Case in point: This year we kicked off May with at least two weeks of lovely weather. I mean, we were getting sunburned at Ian’s Saturday baseball games. But the week of Memorial Day arrives and what do we get? Clouds, rain and downright chilly weather. Sadly, it’s been known to continue this way through June until July 4 hits, which all Portlanders know is the true start of summer. Until that date, all bets are off.

END_OF_DOCUMENT_TOKEN_TO_BE_REPLACED

Last week we joined the gazillions of families who use their little ones’ spring break as an opportunity for some family togetherness. We feel lucky that we don’t have to venture far for great vacation options. We passed up the ever-popular Sunriver for Brasada Ranch in the Powell Butte area outside of Bend. Despite some bumps during the booking process and pre-arrival, I can’t think of many bad things to say about it once we were on the property. It was great.

After five(ish) days of R&R, we returned to gorgeous weather in Portland over the weekend. Our second Easter in our home with the gift of sunshine and perfect temperatures. It was a lovely week, and very appreciated time as we return to our day jobs, volunteer work for two upcoming schools events, and the start of Little League and swimming again this week. I think it’s going to be a busy spring.

Jeff and I are enjoying some lovely time away from daily life with Elena and Ian this week in central Oregon. I’d like to say that we’ve been totally unplugged, but of course, we haven’t. So, like many others, we’ve both been overwhelmed with red and pink images online, other photos and news accounts of the “controversial” issue before the Supreme Court this week. To say that I’m frustrated – and dare I say, angry – about the time that we as a nation are spending on this issue is an understatement.

My son’s school district lost 300 teachers this year. He no longer has a librarian (who he talked about often) and class sizes continue to grow to absurd levels. He has PE, library, technology and music once every several days. Teachers are instructing classes and subjects in which they have no previous experience because they were needed there after teachers who were qualified in those areas – including areas like sciences, foreign languages and special education – were let go. (Actually, Ian’s former school librarian wasn’t completely let go – she now teaches second grade at his school, speaking of random teacher transfers.) This year, Ian tested into Oregon’s advanced student program, but a lack of funding and resources has made us realize that though his educators have the best of intentions, challenging him to reach his full potential is, understandably, the least of their worries. Without a key state government reform this year and voters approving a local levy to raise property taxes, there will be more bleeding next year.

We are not unique. Nationwide, our entire education system is severely broken from funding to the way we are preparing future generations to keep up with what’s required to succeed in the modern world. And we are spending precious time and money on debating whether or not everyone has the right to equal benefits in marriage? Really? Shame on us.

END_OF_DOCUMENT_TOKEN_TO_BE_REPLACED

So, I had heard for quite a while that we were getting flamingos at work – which, by the way, is an okay-normal type thing when you work at a zoo. Finally, a couple of months ago, the word that they were on their way…21 lesser flamingos coming from the San Antonio Zoo, which was phasing out their exhibit.

Now, first, before I get to the flamingos, let me say that I have definitely gained a new appreciation for birds since working at the zoo. There are so many really special, gorgeous birds out there. Many of them, in Oregon – not the least of which is the always amazing and majestic bald eagle. What a treat when we were in Klamath Falls last summer to see so many of them there in the wild! Perhaps I digress…

Despite my newfound bird appreciation, I didn’t initially think all that much about the flamingos – except that sitting in the marketing department and all – there was a lot of thinking about flamingos. First came the brainstorm. Then the photos. Then the billboard designs. Then the billboards on the freeways, complete with plastic flamingos on top. Then, this week, the culmination leading up to the new exhibit opening with the surprise #flockupy popping up all over town. Plus, the local news reporting about it. And let’s not forget the cool pink flamingo necklaces my colleague Krista got us all to wear around the office all week long. I mean, this flamingo thing is kind of fun.

On Monday of this week, after I had met a big deadline the day before, I took a sadly, somewhat rare break and walked into the zoo to go visit these new members of the family. They were/are cute. And kind of funny little guys and gals. They all hang out right together. Like, I’m thinking they aren’t really American because they don’t seem all that concerned about personal space. The closer, the merrier, as far as I could tell. And they are definitely into the standing on one leg thing. And amazingly flexible. All in all, super good at yoga, I would guess.

Also, when you get past their devil-red eyes, they are just gorgeous birds. The light pink color is just amazing, and I love the accents of darker pink that highlight the ends of their wings. Really, so pretty, I think.

So, by now perhaps you are wondering what this has to do with first graders? Well, on Tuesday morning I was out with my neighbor/walking partner, talking about how cool the new flamingos are when she says that her daughter, a first grader – but not in Ian’s class – told her that flamingos are pink because they eat shrimp! Hee hee, yeah right…sounds a little “fishy” to me!

Then, Wednesday morning I’m volunteering in Ian’s first grade class, getting ready to take a group of kids off for reading group and one of the girls asks about my (totally awesome) flamingo necklace. She says she loves flamingos! Then, “Did you know that flamingos are pink because they eat shrimp?” Wha??! Alrighty, now I’m suspicious. Could these first graders know something I don’t know?? (Wait, don’t answer that.)

A couple of hours later I’m back at work at the end of a staff meeting when there’s a call for any last questions/comments before we wrap. I can’t help myself. I must know the truth. My hand goes up…”So, I’ve heard via two first graders that flamingos are pink because they eat shrimp! True, or false??” Instead of the chuckles I half expected, I get a (half) collective…”It’s true!”

So I guess the final answer is that no, apparently I am not smarter than one or more first graders. At least when it comes to flamingo trivia.

And that’s all I have to say about that. Except, flamingos will be officially available to greet their adoring public starting tomorrow, March 23 so… 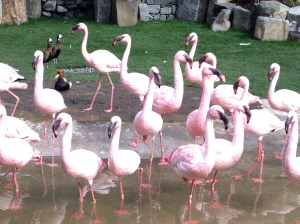 It’s pouring outside. I can hear it as I type. It’s the kind of rainstorm that blows in from the Pacific and makes you want to stay inside curled up by the fire. Friday was the same way…one of those wet, cold, gray, just plain nasty days. It is, of course, not a surprise given that like clockwork, sometime right around Halloween the glory that is summer in Portland disappears as Mother Nature casts her wet spell over the region for the next several months.

Jeff recalls that he took the transition hard last year, but I’m the one who is having the hard time this year. It was around last weekend that the local weather guys and gals began sounding the warning sirens: For the first time in some crazy string of time, rain was headed our way; a storm was coming in Thursday night. The buzz began that the end of summer was imminent.