Yesterday, I had a valuable interaction with a colleague. She initially approached me because she wanted to share an observation regarding my expression of frustration in an team meeting earlier in the week. I appreciated her feedback, as I know that no matter where we are in our career, we always have the opportunity to learn and grow. Often, our colleagues can be the most valuable source of that lesson. It was a very good conversation and I appreciated that she had “called me out,” if you will.

In the course of discussion, I brought up one of those things that most of us at least subconsciously realize on some level but isn’t always acknowledged, which is that I had come to that meeting with a series of “bubbles” surrounding me. You know – these are the silent thoughts swirling in your head that often aren’t spoken; the ones that can affect outward behavior – or maybe they don’t. In this particular situation, my bubbles ranged from stress over looming, unrelated project deadlines to a level of disagreement around some of the concepts being discussed that I felt were out of my control to change to the always-present literal pain in my neck.

In sharing this, I reminded my colleague of this video that we are shown during New Employee Orientation. It was produced by the Cleveland Clinic; KP shows it to help illustrate the compassion we must always demonstrate for our members/patients (particularly staff who work in care delivery) and for one another. I affectionately refer to it as the “the bubble video” and think about it fairly often: when there’s that person who is tailgating me on the freeway, the person who “steals” my parking spot, or the coworker who shows up to a meeting with something other than their best self. It made an impression on me, and maybe it will on you too. Of course, it also means that I cried on my very first day of work.

So, I had heard for quite a while that we were getting flamingos at work – which, by the way, is an okay-normal type thing when you work at a zoo. Finally, a couple of months ago, the word that they were on their way…21 lesser flamingos coming from the San Antonio Zoo, which was phasing out their exhibit.

Now, first, before I get to the flamingos, let me say that I have definitely gained a new appreciation for birds since working at the zoo. There are so many really special, gorgeous birds out there. Many of them, in Oregon – not the least of which is the always amazing and majestic bald eagle. What a treat when we were in Klamath Falls last summer to see so many of them there in the wild! Perhaps I digress…

Despite my newfound bird appreciation, I didn’t initially think all that much about the flamingos – except that sitting in the marketing department and all – there was a lot of thinking about flamingos. First came the brainstorm. Then the photos. Then the billboard designs. Then the billboards on the freeways, complete with plastic flamingos on top. Then, this week, the culmination leading up to the new exhibit opening with the surprise #flockupy popping up all over town. Plus, the local news reporting about it. And let’s not forget the cool pink flamingo necklaces my colleague Krista got us all to wear around the office all week long. I mean, this flamingo thing is kind of fun.

On Monday of this week, after I had met a big deadline the day before, I took a sadly, somewhat rare break and walked into the zoo to go visit these new members of the family. They were/are cute. And kind of funny little guys and gals. They all hang out right together. Like, I’m thinking they aren’t really American because they don’t seem all that concerned about personal space. The closer, the merrier, as far as I could tell. And they are definitely into the standing on one leg thing. And amazingly flexible. All in all, super good at yoga, I would guess.

Also, when you get past their devil-red eyes, they are just gorgeous birds. The light pink color is just amazing, and I love the accents of darker pink that highlight the ends of their wings. Really, so pretty, I think.

So, by now perhaps you are wondering what this has to do with first graders? Well, on Tuesday morning I was out with my neighbor/walking partner, talking about how cool the new flamingos are when she says that her daughter, a first grader – but not in Ian’s class – told her that flamingos are pink because they eat shrimp! Hee hee, yeah right…sounds a little “fishy” to me!

Then, Wednesday morning I’m volunteering in Ian’s first grade class, getting ready to take a group of kids off for reading group and one of the girls asks about my (totally awesome) flamingo necklace. She says she loves flamingos! Then, “Did you know that flamingos are pink because they eat shrimp?” Wha??! Alrighty, now I’m suspicious. Could these first graders know something I don’t know?? (Wait, don’t answer that.)

A couple of hours later I’m back at work at the end of a staff meeting when there’s a call for any last questions/comments before we wrap. I can’t help myself. I must know the truth. My hand goes up…”So, I’ve heard via two first graders that flamingos are pink because they eat shrimp! True, or false??” Instead of the chuckles I half expected, I get a (half) collective…”It’s true!”

So I guess the final answer is that no, apparently I am not smarter than one or more first graders. At least when it comes to flamingo trivia.

And that’s all I have to say about that. Except, flamingos will be officially available to greet their adoring public starting tomorrow, March 23 so…

According to the clock in our room, it was about 5:25 am when my phone rang. This was it – the call that I felt like I’ve been waiting for since at least the beginning of November – and in meetings for long before. After a day or so – frankly, it’s kind of a blur now – in “early” labor, one of the zoo’s Asian elephants, Rose-Tu had moved to active labor around midnight and apparently not interested in prolonging the situation, had given birth a couple of hours later to a healthy female calf. Ten minutes later I was pulling out of the garage and on my way to work, feeling both excited and a bit sad that I wouldn’t be there when my own birthday girl woke up in the morning.

My colleague Krista and I arrived about the same time and were the well-rested ones in the zoo’s marketing department; some others had been there all night. Blurry eyes, however, had zero effect on the pure excitement that permeated the still mostly-dark halls of the office. I

quickly got to work in crafting communications for our donors whom we’d been providing with regular updates on Rose-Tu’s progress the past couple of days. My second role was to help the team with whatever news media needs presented themselves.

END_OF_DOCUMENT_TOKEN_TO_BE_REPLACED 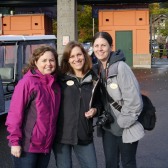 I had to work today. On a Saturday. My sixth day of the week. Yes, like everyone else, I do certainly enjoy my weekends, but these days – more often than not when I must work on the weekends, I admit that it’s not to sit chained to my desk and my computer all day.

Usually, it’s because I’m working an event, as was the case today. This usually means that I get to be a part of some sort of fun/cool/interesting experience at the zoo. There’s only so much one can declare that grueling “work,” right? Today it was for Zoofari, a pretty sweet event for those qualify and register before it fills up, to go behind-the-scenes of five different areas of the zoo.

END_OF_DOCUMENT_TOKEN_TO_BE_REPLACED

I very much appreciate that Jeff’s employer, Point B, puts great emphasis on cultivating a strong employee culture. Each year they go out of their way to host “culture events” not just for the associates, but also for their partners and sometimes, the whole family.

The past few years they’ve hosted a day of wine tasting and not surprisingly, Jeff and I are always happy to partake. The day includes visits to three wineries with private tastings, a private lunch hosted by one of the wineries and of course, some wine to take home. This year’s event was this past Saturday. We visited Soter Vineyards, Willakenzie Estate and ended at Solena Estate. All were fabulous, though Soter was my favorite; a gorgeous by-appointment-only glass tasting room on a hill overlooking the valley, that happens to double as the part of the owner’s second home. I was ready to move in.

The whole day is always a fun time…I’m already looking forward to next year.