I think for the first time this summer we are having several consecutive days of temperatures in the high 70s/low 80s. It’s so nice. Though, Portland being by far the coolest climate I’ve ever lived in, it’s funny how quickly your body adapts. Before you know it, 60 seems like 70, 70 like 80, etc. Case in point: Yesterday a friend and I went outside to eat our lunch on a bench and I would have almost bet my life that it was at least 85. Instead, we later found out it was in the low 70s. Which means that I definitely have a future in broadcast meteorology, if I want one.

Anyway, when I left work this afternoon it was glorious outside, as it has been recently. Instead of my usual way out, I departed in the opposite direction because I was headed down to the NW 23rd Street area for first-ever (in Portland) weekday haircut. (More on that in a minute.) The opposite direction winds you through some back roads around Hoyt Arboretum and through some lovely neighborhoods. For the uninitiated, the Arboretum, part of which is basically across the street from the zoo’s parking lot, encompasses – among other things – 21 trails covering 12 miles within 187 acres. All inside the City of Portland.

As you might guess, Portlanders were out in full force on such a lovely early evening, taking advantage of the zoo, Children’s Museum, World Forestry Center and Veteran’s Memorial and the Arboretum, all right next door to each other. 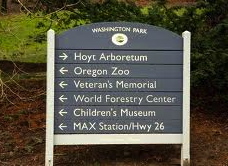 It made me feel crazy for being so close to this amazing natural beauty and the opportunity to um, say, get a little exercise. Yet, there I am, sitting at my desk inside most days, even at lunchtime. And, I do have coworkers who get out and exercise at lunch, so it’s not like I can legitimately argue that it’s not part of the culture. But for the time being, I had places to go and important people to see, so off I went – zooming around in my car and filling the clean air with an extra dose of emissions.

Speaking of being environmentally friendly and extra doses, beautiful weather also brings all the bicyclists out of the woodwork. People who love to ride bikes also love to live in Portland. In fact, according to the Portland Bureau of Transportation, Portland has the highest share of bicycle commuters of any large U.S. city. (Um, since when do we call Portland a “large” city? I guess we’ll go with it for now so I don’t have to go fishing for another stat.) I firmly believe that half of these commuters work at the Oregon Zoo. In fact, one of my suite-mates makes me feel guilty every day by strolling in on his bicycle. However, I just think of the water he probably wastes on showers with all that bike riding and instantly, I feel better about myself.

Besides the fact that there are a lot of bikes in Portland, it’s also important to note that there are also a lot of hills and winding roads. At least on the west side, which is where I happen to live, work and spend the most time. As far as I’m concerned, bikes and hills are not the same as chocolate and peanut butter, if you catch my drift. Yet, these so-called commuters, or sometimes just plain bike “enthusiasts,” seem to purposely travel these roads. Going uphill.

Part of my drive to 23rd Street after work today involved heading down Burnside Road – “down” being the key word. This road is not made for the car that is faint of heart, much less a bicycle. And, certainly not when it’s actually warm outside like it was today! Apparently, my pedaling friends see things differently. I passed this one guy headed up Burnside on the shoulder of the other side of the road who was struggling to complete every rotation, as if he might have to give up and could be laid out flat on the road at any second. But I knew he wouldn’t – because that’s how they all look! Seriously people, is this really your idea of fun? Because if you need some ideas, I could give them to you. And, for those of you who think I’m dissing the bikers because I’m just jealous that they are actually doing something about the environment and are in way better shape than I am – you could not be any closer to the truth.

By 5:30 p.m. I was on 23rd Street searching for parking when I came across a spot right in front of my hair salon, which was nothing short of a miracle. Up the stairs I went where  I was greeted by Dan, who might possibly be the friendliest receptionist in the history of the world. And then another trip upstairs inside to find my fabulous hair (person? lady? dresser?), Nicole waiting to get started. Yay!

It should be no surprise that I could write an entire separate post on the woes of finding someone new to cut your hair when you move. In fact, if I had to make a guess, I bet women would rank it among the most stressful parts of a relocation. Like many of us, I paid my “dues” with some bad “do’s” before I came across Nicole at Dezi Salon and found my, shall we say, hairmate? A mom of two boys who works part time, I most often see her on Sundays but when I called last weekend with a slight hair issue and we discovered that I wasn’t going to be able to get in on a weekend for at least a couple of weeks, Nicole very kindly offered to meet me at the salon this evening for a haircut. How great is that? (And, I’m not even writing this about her because she told me she reads this blog every now and then.)

Looking trimmed and lovely, I was off and home by 7:00 p.m. – just in the nick of time to help with bedtime and read Elena “Night-Night, Little Pookie” for the 856th time since I bought it a month ago. Sandra Boynton books are the best.