Jeff and I decided with both Ian and Elena that we did not want to find out their sex before they were born. While there were different reasons we chose this path for ourselves, one of my personal reasons was that I didn’t care to have all the questions, comments and stereotypes that would come along with it:

Oh, you’re having a girl! How exciting…you’ll have one of each! And now you get to buy all those cute clothes! (or insert female stereotype of your choice here)

Oh, a boy! How exciting…boys have so much energy! (or insert male stereotype of your choice here)

That said, I admit that before Ian was born – I wondered sometimes that if it was a boy (which I highly suspected from the beginning, by the way), would I relate to him as well as I would a girl given that, well, I am indeed a “girl” myself? But this was also part of the reason why I didn’t want to know. Because I didn’t need that extra time to second guess how I’d be as the mother of a boy. And sure enough, when Ian was born at Virginia Hospital Center the afternoon of January 10, 2006, he wasn’t a boy. He wasn’t a girl. He was my firstborn child and he was the most wonderful thing I had ever seen.

From then on, of course all I knew was being the mother of a boy and it felt comfortable. I also feel as though Jeff and I have both made a conscious effort with him to try not to promote stereotypes…things like being competitive or strong or “tough.” Or, really into sports, for instance. Though, on that one, I must say that it’s amazing how in love with anything remotely sports-related Ian has been since he was a baby. I remember him being transfixed by figure skaters on the television from his high chair one day. (Of course not that I ever had skating on TV while I was feeding him. Jeff must have left it on or something…) But golf, swimming, soccer, skiing, gymnastics, you name it – if it involves some sort of athletics, he enjoys it. And, as someone who grew up seeing the benefit of being involved in sports, I’m good with that.

Then, on the morning of November 30, 2009, along comes Elena. Once the doctor announced that we had a little girl, and that I indeed had just had a baby and not an extra-large watermelon (following my doc’s multiple exclamations that she was “so big!”) – my initial reaction in the hours and days that followed was quite different from what I expected. Frankly, I felt nervous. I wasn’t the mother of a girl…I was the mother of a boy! Right? Right! But wait…wrong! Because here was this wonderful little person with blue eyes looking up at me and she was definitely a girl. And then all these questions came over me, and they involved feelings like anxiety and sense of responsibility and pressure! So maybe some parents are reading this now thinking, “Um, yeah, so you felt like every new parent does – what’s the big deal?” I’m not talking anxiety and sense of responsibility and pressure over parenting, I’m talking about anxiety and sense of responsibility and pressure over parenting a girl. (And, clearly I’m not the only mother who has ever felt this before either, but it was something that caught me by surprise.)

While Elena’s main question may have been about when she was going to get fed and changed…there was no time for that. I had bigger fish to fry. Like, wondering: Will I teach her to be confident? Will she have high self-esteem? Will she be successful with whatever her definition of success is? Will she like me when she gets older? Will she think of me as a role model? When it came down to it, I was downright nervous about taking on this whole girl thing and being half of a unit responsible for raising our new child to be a confident, independent woman who respected me – and us – for it at the end of the day. I try to take that role seriously everyday. For both of my children, actually.

But, there’s no doubt that even though we’ve come a long way, serious gender stereotypes still confront us at every turn and for women, it can be an uphill battle. Which is why when a friend on posted this wonderful article on Facebook yesterday, it resonated with me enough to inspire this post.

I distinctly remember the first day I was back at the mall after having Elena (it was at least five days afterwards) and walked into Gymboree because soon she’d be in need of some more things. I ventured to the girls’ section where it looked like a bottle of Pepto Bismol (in various shades, of course) had exploded in the middle of a florist shop located within a ballet studio. Because apparently, one can never have too much pink. Soon, I was the one who needed some Pepto Bismol, until I quickly retreated to the boys’ section where I was already used to the ignoring the blast of blue shirts and sweaters bearing trucks and trains, and various sporting activities.

Of course, I am me, so it didn’t take me all that long before I grew more comfortable visiting both sections of the store. But that doesn’t mean I don’t cringe more often than not. I love all the sayings like, “Slugger!” or “Mommy’s Star!” or “Daddy’s Cutie!” or…you get the point. (More Pepto Bismol, please.) And, why are some baby girls subjected to those big bows in their hair? If they need something at all, why not just a small clip? Of course, my current favorite are the huge tulle skirts you see little girls in everywhere – even babies. As far as I’m concerned, it’s the ultimate in, “Look at me! Look at what a ‘girl’ I am!” It’s as if, at least for the moment they are wearing them, that they define their entire being…like you can’t – and shouldn’t – look beyond the ballet skirt, whether or not they know a thing about ballet.

However, my eyes aren’t completely closed – nor am I perfect or stereotype-free (yes, Elena does wear pink and purple, sometimes with flowers or butterflies). I especially know that talk is cheap when your daughter is 19 months old and can’t form the words yet to beg and plead to be wearing a tulle skirt to school like “all of her friends are,” or buying that Barbie doll, or whatever the thing is now that little girls must have. It will be hard, I’m sure sometimes impossible, to deny her these things she wants. Just like it’s eye-rolling sometimes when Ian gravitates toward traditional “boy” things, though honestly, he’s not overboard – yet, at least – with that kind of stuff. (Or equally hard when he asks me why he can’t get his toenails painted like I do.. especially when the answer is as lame as, “Well, boys just don’t usually do that.”) But, I guess I’m prone to be more sensitive to it on Elena’s side because I do worry about the uphill battle girls, and women, have.

So, similar to the point the article makes, I think our job is to do the best we can in teaching our girls – and boys – to think about themselves beyond stereotypes and believe that they can be anything they want to be, whether they are a boy or a girl.

That, and feel fortunate that they sell two-packs of Pepto Bismol at Costco. 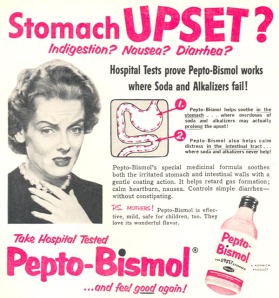