About the time I first noticed increasing talk of terrariums, they started showing up in my world at work. First a cute little one on a coworker’s desk. Then, another at another desk. “Where’d you get that little thing?” I asked. “I made it!” “What? How’d you do that?” “Oh, there’s this little shop by my house called Artemisia. They specialize in terrariums.” Of course they do…we’re in Portland so why wouldn’t there already be a boutique in existence that specializes in terrariums? And yes, it’s on the east side. Along with all the best restaurants. I digress.

The next week my friend who sits next to me brought one for her desk. Again, me: “Where’d you get that?” (Apparently I’m very nosy.) “A girlfriend made it for me!” “Oh, it’s super cute.” A couple of weeks later a woman who had been temping as our receptionist/assistant was leaving and one of my other east-side coworkers hands her a little gift. It’s – yep, you guessed it – the goodies to make her own terrarium. Sheesh. These things are all over the place! The other day, I walked into my boss’ office and suddenly she had one on the corner of her desk. Well, that does it! No cute trends is allowed to exist in this world without me being a part of it.

So, I emailed my friend Beth (who had given the gift to the assistant) asking how one goes about making a terrarium. Her first response, “Bring in a container and I’ll bring in all my crap and you can choose.” Followed by something about her craft collection getting way out of hand. While that route was/is definitely not out of the question, of course I also wanted the cute boutique experience. She directed me to either take a trip to Artemisia or Pistils Nursery on N. Mississippi. “Will you be alone or with the fam?” she asked. “Probably alone. I don’t really see the rest of my family tolerating a terrarium-making outing.” Well, if you’re alone, go to Artemisia because they have adorable (and breakable) stuff there, but if you have the kids, go to Pistils because they have chickens out back and the kids can feed them. Keeps them occupied while you do your thing.” I made a mental note.

Meanwhile, I also started admiring all the air plants near the checkout at New Seasons. They are so delicate and unusual! They also sell the terrariums with air plants in the hanging glass teardrops that I’m always looking at, if only I could figure out where to hang one. (Kind of the story of my life in terms of home decor right now.)

So, this past Saturday I made a “quick” trip to North Portland to Queen Bee to talk to them about a recent purchase. As I was departing, it occurred to me that I was very close to N. Mississippi, which surely meant I could be at Pistils in a jiffy. Why not just “quickly” swing by, right? I pulled up to rock star parking on the street, which clearly showed it was meant to be.

Pistils is a cute little shop that describes itself as an “urban nursery.” Immediately I saw a woman at a table scooping soil into a glass container, choosing glass and rocks and carefully planting her succulents into the soil with some special spoon-like tool. They had a whole cabinet of tiny drawers full of different kinds of sand, glass and rocks in almost any color you could imagine. I was intrigued, but also a bit intimidated.

I caught the attention of a staff member and said I was “potentially” interested in making a terrarium but wasn’t sure how everything worked. Ten minutes later I had picked out my glass container, filled it with charcoal, a layer of moss I picked from one of the drawers, a layer of soil (with help from the nice woman who was giving me a tutorial) and was ready to plant my cute little succulents I had picked out. “Wow, look at me being all gardener/artist-like,” I thought. I decorated the top of my soil with some shiny pieces of glass and accented it with a medium-size river rock. Because I had picked a tall container, I asked for a twig so that I could place it in there and have an air plant up high to bring some balance to the arrangement. Another 10 minutes later, I had completed my first terrarium, which the woman watered for me and packaged up in a brown bag with colorful tissue paper, like my very own gift for myself. And, here it is! 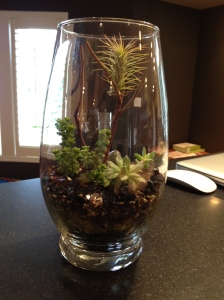 What do you think? Isn’t it cute? Can I say the word “cute” any more in this post? That might be overkill, but what I can say is that there will be more where this came from!

2 thoughts on “a burpo original”