My long-time best friend turned 40 years old yesterday. Jeff turned 40 two years ago as of this coming Friday, which was quite okay. But when your best friend, who you remember hanging out with in high school, turns 40 – well, that’s like a whole different story. Of course, not because I am horrified that she turned 40. Au contraire, she looks pretty damn good for 40 years old and a mom of two. It’s really more about the fact that it means that I’m about to turn 40! GULP. I mean, wasn’t it like just yesterday that we were cruising down Baker Road among the peach and cherry orchards in her little VW Bug? (Well, okay that was before she crashed it – which she was sooooo afraid to tell her dad about – and got her even-smaller Ford Festiva that could barely contain her awesome 80s permed hair, but I still remember that cute little car.)

Melissa and I met when we were freshmen in at Linden High School. She was a cheerleader and veteran of the Linden Unified School District while I was still getting my bearings out in the country after we moved out to Linden from the nearby big city of Stockton when I was in seventh grade. I still remember our first “date.” I can’t remember who asked who (hey, that’s what happens when you are almost 40), but she came to my house and picked me up in her Bug and we drove the .25 miles to school together for the premiere event of the year in Linden: the famed Linden Cherry Festival. I think it went well because the rest, as they say, is history.

The basis for our relationship didn’t end with being high school classmates. In the fall of 1989, we both headed to California State University, Chico where we roomed together in the freshman dorm, followed by living together our sophomore and senior year in an off-campus apartment, separating only for our junior year when we both studied abroad – Melissa in Japan and me in Spain. I guess it’s worth pointing out that we didn’t just room together for three of our four years – we pretty much spent most of our free time together, joined the same sorority and had mostly all the same friends. Amazingly, minus a few tiffs here and there, we were pretty much thick as thieves (whatever that really means, anyway).

When we graduated from Chico in 1993, it looked as though our days of being attached at the hip might be over when she went into grad school at the Monterey Institute of International Studies and I left California for the east coast to attend the University of Delaware. I remember it being a little weird sometimes when I’d talk with her because she clearly had felt free to make other friends in Monterey and even worse, a serious boyfriend! Did I feel a little out of touch? Absolutely! Did I let it show? Absolutely not!

Then, by some twist of fate – or not – in 1995 after we had graduated from our respective graduate programs, we both decided to move to the Washington, D.C. area where we….yep, you guessed it…became roommates. It felt like…like…well, it kind of felt something like this:

This is where things get foggy. Not because of how hard we were both working at our first “real” jobs or how much time we spent at Lulu’s, but probably more of a function of – once again – me getting old. What I do know is that we lived for at least our first year at the Oakwood apartments in Alexandria and we bought a kick-ass sectional sofa from some dude who lived downstairs from us for 100 smackers. And yes, for the mathematicians out there – that’s 50 smackers each! (Our first real purchase together – aawwww.) And believe me, we were so proud of that damn sofa that we told everyone we came across on the Metro and elsewhere how much we paid for that thing because it was super sweet. Of course, the sofa was handled with care when it moved with us into our super spacious townhouse with fellow Californian, my then-coworker and to this day still one of my best buds, Molly. We were brilliantly known as “The Three M’s.” And yes, we pretty much did everything together.

Melissa and I finally parted roomie ways for the last time when she, Molly and I all decided that it was time for us to get our own grown-up apartments (and I use that term loosely). Of course, never wanting to stray too far, Melissa and I moved to yet a third part of Alexandria about .25 miles down the road from one another. It was then that she met her now husband, Phil, and I met Jeff. (Molly left us all and moved to New York to be with a couple other of our girlfriends, darn her.)

Alas, the girls from Linden were making their own way in life. Melissa and Phil got married at Melissa’s parents’ house outside of Stockton on September 15, 2001. I had proudly been asked to be the maid of honor. It was a rough few days prior for everyone, no doubt. I was in Los Angeles for work on September 11. The plan had been for me to fly up to northern California for the rehearsal dinner and wedding at the end of the week, and for Jeff – who had been working in Virginia Beach – to head out of BWI at the end of the week and meet up with me for the wedding. After the events of that Tuesday, I ended up driving up north for the festivities, but like so many of Melissa and Phil’s guests, Jeff never made it out for the wedding. I was pretty bummed about that. After much debate between the couple. the wedding went on as planned and it was absolutely beautiful.

Everything was so wonderful, except the part where I stood up to give my maid of honor speech. I have always maintained that verbal communication is not my strongest suit yet for these type of occasions, there is plenty of opportunity to be well-prepared. Except that for whatever reason, I was not. I am fortunate enough that I don’t have a ton of regrets in my life, but whenever I think back to standing up to talk about Melissa at her wedding, I feel regret that I did not more accurately, or eloquently, present what she and our friendship had meant/means to me. It was downright awkward and not at all what she deserved. Ugh. Luckily, her close friend Zita jumped up after me and said everything I should have said, even better than I could have ever said it.

Fortunate for me, I was not disowned and though we have now lived in separate cities for nearly 10 years now (she’s in San Francisco) and sometimes don’t talk as often as we’d like – when we do it’s pretty much the same as it always was. Which means it usually involves a large dose of sarcasm and humor, not necessarily in that order. And sometimes involving our children (she also has a boy and a girl); rarely our husbands. 🙂

I could go on about the good memories I have of the time we’ve spent together over the years, but instead, I’ll leave it at this: Melissa, if you read this – here’s to a very happy (now belated) 40th and I look forward to 40 more years (at least) of friendship!

Oh, and as I went to pull some photos of us for this post, I was a bit sad to discover that apparently most of our many pictures together were pre-digital camera age, so I’m afraid a few dance scenes from my wedding are the best I have for now: 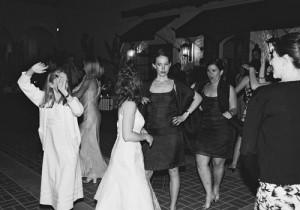 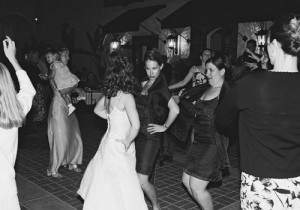 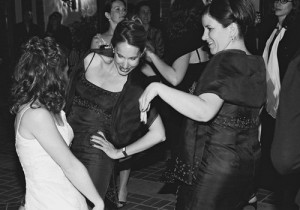